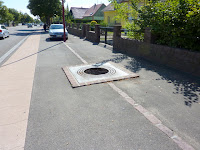 ...would drive into a bottomless 60cm-diameter hole in the pavement, in broad daylight, wouldn't you think?
So I don't know what my excuse is!
Actually, I blame Jean-Pierre Pernaud.
I mentioned previously that we often watch his 1-o'clock niaise program, in spite of our better judgement.
The day world war 3 breaks out, Jean-Pierre will still start with the weather, then an item about the cost of school satchels & maybe a piece about yet another village losing its last grocery shop, before mentioning that unfortunately...
But he does include good cameos on France & the French.
This week's series was on The Route des Vins in Alsace.
http://www.tf1.fr/jt-13h/magazines-semaine/la-route-des-vins-d-alsace-6662887.html

On Monday, they visited Niedermorschwihr & we realized that, although we have "done" the route des vins many, many times, we have never seen Niedermorschwihr or heard of its spiral church tower.
So on Wednesday, we set off to have a look.
We drove to Colmar & followed a sign towards Ingersheim, only to realize we were heading east instead of west.
Wanting to consult the map (remember those?) & probably make a U-turn, I drove onto a wide pavement & stopped.
The need for a U-turn confirmed, I started to drive off & was dumbfounded, like a nonchalant bear falling into a bear-trap, when the supposed-earth dematerialised under the front of the car!
With the car resting on its sill, I thought we would need hoisting out, but in fact it backed out easily.
A careful look all round the tyre showed no obvious damage, but a couple of km further on, the heavying steering warned of partial deflation & I had to change the wheel.
Not surprisingly, the tyre had in fact been cut by the sharp edge of the cast-iron tree-surround it had just visited.
Oh well - chalk it up to experience.
Not too bad as the tyre had cost 65€ 49 000km ago & was about 60% worn.
Ah - but you cannot have more than 5mm difference in tread depth between tyres on the same axle...
So - make that 2 new tyres = 130€.
Then, I run all year round on Winter tyres (long subject of future post?) & my garage could not find any Pirelli SnowControl 190's in the 165/65-R13 size needed to match the other tyres.
It was 29°C at the time & they suggested trying again nearer Winter...
Checking Pirelli's websites, I found the situation was worse than that - they no longer make Winter tyres for 13" wheels!
Goodyear? - same thing!
Continental? - nope...
As far as I can see, the only 13" winter tyres available are from Firestone (not a favorite make) or from various third-world never-heard-of's.
I suppose that is the cost of the stupid fashion for ever-bigger wheels.
Come back Issigonis - all is foregiven!