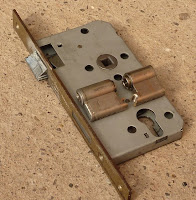 I hesitated before posting this, as I don't approve of disseminating potentially harmful information.
But then - anybody can find it in 5 minutes Googling & burglars already know it.
Innocent householders like me though, maybe don't.
And maybe should.
We recently returned from a week's absence to find we couldn't unlock the usual door to get into the house.
Fortunately, AA had stayed home & had found the problem when inside trying to get out, rather than outside trying to get in, and had been able to use a second entrance, which is normally double-locked & chained.
So we had a problem, but not an emergency.
Had we been stuck outside, we would probably have called out a locksmith, which is notoriously expensive & (as I now know) pointless.
I knew nothing about French (or any other) door-locks, but a bit of Googling soon made things obvious.
See top picture.
The lock is in 2 parts:
1. The big rectangular latch mechanism, which can only be removed from the door when the door is open & after the barrel is removed.
2. The lock barrel, which is inserted in the keyhole of the latch mechanism & held in place by a screw which can only be removed when the door is open...
So nice guys can't remove the lock without unlocking it.
I had not previously realized that there are actually 2 separate lock barrels; one for the key from inside & one for the key from outside.
They are joined together by a very small section of metal, the rest of the keyhole section being cut away between the 2 barrels to allow rotation of the lug which operates the latch.
That very small section of metal is then drastically weakened by being drilled & tapped for the screw which holds the barrel into the latch mechanism. 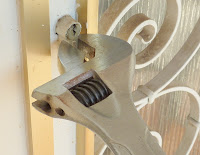 So you don't need to be much of an engineer (or much of a burglar) to see where to attack this lock.
I used an adjustable spanner, clamped it snuggly on the rectangular section of the protruding barrel, and pushed sideways.
The barrel instantly broke at the ridiculously fragile center portion & the 2 halves fell out of the door. 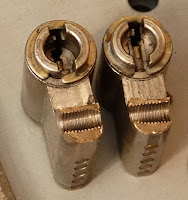