Some years back, I bought a Panasonic TZ6 "pocket zoom" camera.
It was extremely convenient and an excellent compromise between small size & decent quality with what was then a big zoom range.
One annoying fault was that the Program Control knob was right on the corner and only too easy to rotate accidentally, so you (I & lots of others - see internet) frequently took shots using the wrong program.

I foolishly fell off a cliff holding that camera, so when I was well enough to use a camera again, I bought its current replacement, a TZ18.

Panasonic had obviously listened to the many complaints about the Program knob, so had repositioned it to a more protected zone & I never had another incident on that score.

But my particular TZ18 had frequent problems with wrong focusing & dust inside the lens/sensor, in spite of very careful handling (& no cliffs).
It was repaired several times under the 2-year garantee - each time with a good loan camera & an extension to the garantee timing.
Only days after the extended garantee expired, it again developed dust & focus problems, so I assumed I would need to pay almost as much to get it repaired again as to buy a new camera, but the dealer (Boulanger) was very sympathetic & managed to come to some agreement with Panasonic whereby I got 100% of the original purchase price back (as a credit note)!

Disappointed by the reliability of the TZ18, but impressed by the service, I again bought the current replacement, which by this time was the TZ35.
Too soon to know about reliability, it initially feels & sounds "cheaper" than the older models.
It actually was cheaper too.
But then they no longer supply a mains battery charger, just a USB cable to charge the battery inside the camera.
Not progress for me, but I suppose that is convergence with smartphone habits.
Fortunately, I still have the charger & spare battery from the TZ6, so can carry on as before.
The big new irritation is that Panasonic has replaced the old slider switches for On/Off and for Shoot/Replay, by push-buttons.
An advantage is that you can now turn the camera on directly into replay mode without extending the zoom lens, simply by pressing the Replay button.

Obviously too, push buttons are cheaper & more reliable than sliding switches.
The problem is that they have made the On/Off button exactly flush with the top face, so it is impossible to feel where to press it!!!

So to turn the camera on, you need to look at it, or keep pressing in the hope of finding the right spot.
Astonishing!
The right answer would have been to put the on/off button inside a finger-sized recess.
My for-now answer is to add a small bump on the button. 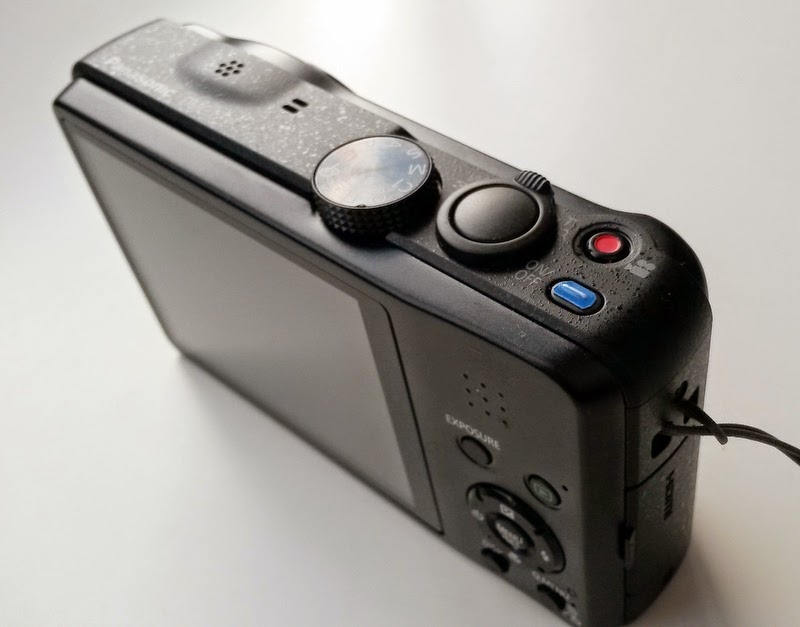 I wondered how to do that & ended up with a letter "I" in Dymo tape (remember Dymo tape?).
I had to cut round the "I" pretty closely to fit on the tiny button, but it works for now & I can easily locate & operate the button without looking or fumbling.

Parting thot: "Much of the social history of the Western world, over the past three decades, has been a history of replacing what worked with what sounded good." - Thomas Sowell
Posted by 2CV67 at 6:07 PM